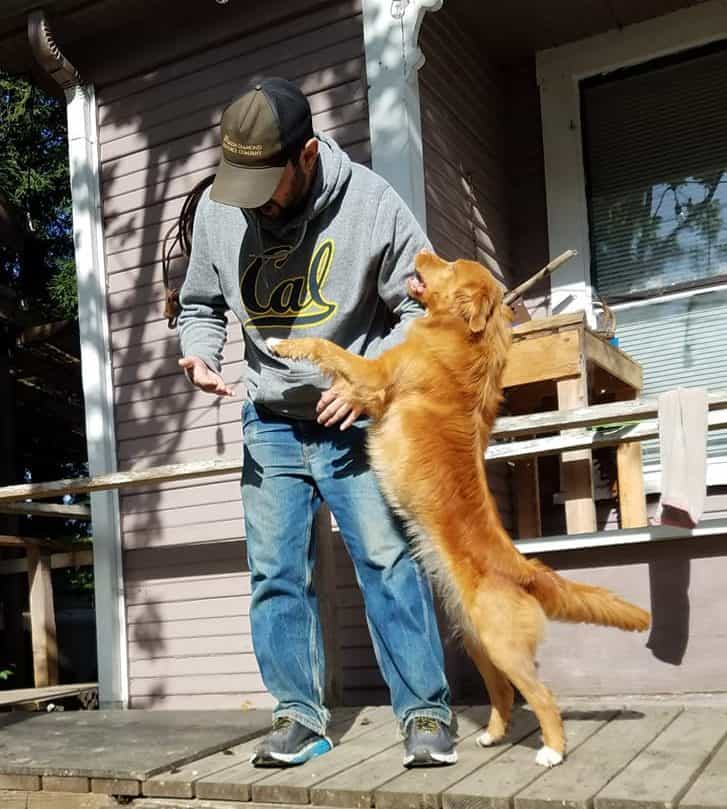 Problems and Solutions: Thinking Through a Training Plan For Unwanted Behaviors

Have you ever had a problem with your dog that drives you nuts?  Something that you wish you could change, but you aren’t quite sure how?  This blog will help you learn how to think through a training plan to solve your problems!

I’d like to discuss a problem that I worked through with my young golden Excel.  Excel is a dog very prone to high arousal and frustration, who also dealt with some separation anxiety.

I started by putting the crate in the corner of the kitchen with a stuffed kong in it while I sat right next to the crate.  The kong was in the crate and the door was open.  If Excel brought the kong out I just put it back, and after a couple reps of that he realized that he kong had to stay in the kennel.  If he would have continued to struggle with bringing the kong out, I would have attached it to the kennel wall.

First I started with Excel chewing on the kong for around 5 minutes in his crate, with me right there.  Over a period of about 4 months, I worked my way farther from the crate.  As long as he was in his crate with the door open licking at the kong, I kept raising criteria by moving a few inches further.  If at any time he’d come out, I would encourage him to go back in and move a few inches closer.

After about 4 months of daily training, Excel would stay comfortably in his crate with the door open even if I left the room.  At that point I started leaving him alone with the door shut, and progressed to kenneling him then leaving the house.  I had a video camera on him at all times so I could see that he was doing okay.

Although Excel would do okay in the crate while we were gone, when we got home he would just lose it.  He’d bark and bark and as soon as I let him out he would frantically jump at me over and over, barking.  I knew this wasn’t good for him, having all these strong anxiety and frustration feelings, but I just couldn’t get him to calm down.  My goal was always to get him out the door to the dog yard as quickly as possible.

So I sat down and started thinking about what I would tell one of my clients.  I needed a training plan!

I knew Excel was jumping and barking due to some pent up anxiety and frustration from being in his crate.  I knew I had to help him deal with those emotions, combined with giving him something else to do.

So I started using food to help lower his arousal and calm him down.  I started by waiting for him to stop barking in his crate, even for just a second.  I would drop kibble in his crate when he was quiet.  After a few rewards, he would calm down slightly, so I would let him out.  As soon as the door opened and I released him (which I did quickly, to avoid more frustration from being asked to stay in the kennel) I would do a scatter with about 15-20 treats.  Fewer treats didn’t give him enough time to calm down.  After he searched and found all the treats, he would be significantly calmer, although still not perfect.  However, he was calm enough that he could learn a new behavior instead of jumping and barking.

I chose to use food because science tells us that food calms down dogs.  When dogs sniff and lick and chew, feel-good chemicals are released, helping to lower arousal and anxiety.  Thankfully Excel was never so over the top that he would refuse food, so it was a great method for him.  I have worked with dogs that can’t eat food in high arousal situations, and by breaking it down and teaching what scatter means in a quiet environment, combined with using higher value rewards, I have almost always found this method to be successful.

For the incompatible behavior, I was looking for something that would prevent Excel from jumping up and give him something to do besides barking.  I didn’t want a behavior that took a lot of impulse control in that moment because I knew that would just set him up to fail.  I finally decided on teaching him to target the outside door.

I started by putting a target on the door and when I was right next to it, I would cue a touch.  He understood this behavior from our obedience training.  At first I used food to reward as I slowly back chained.  Eventually, I could send Excel to the door from downstairs where the crate was.  He would run up the stairs, across the large room, and touch the back door.

I faded the target but I wouldn’t have had to – it could have just stayed on the door.  I also always rewarded him at the door, so he would wait there for me to reward.  Once Excel could do the complete behavior from the kennel to the door, I started rewarding him by letting him outside instead of giving him treats.

And by golly – it took a little effort to teach, but it worked!!  When I walk in the door, Excel stands up and gets excited, and sometimes he’ll whine, but when I walk to the kennel he lays down.  I throw a few pieces of kibble in his crate, open the door and release him, scatter 15-20 more pieces of kibble, then I head up the stairs.  He eats the kibble and races to the door and waits for me.  No more barking, no more jumping.  So much more peaceful!!

If you’re having an issue with your dog, sit down and think about it.  What emotions are likely causing the behavior and is there any way you can change the emotions?  I was able to change the extreme emotions of over-arousal by pairing the event of opening the crate door with arousal-lowering food.

Then think about what behavior you can teach the dog to do instead of the one you don’t like.  Train that new behavior separately and put a lot of reward history on it!  By taking these steps, many of the behaviors that drive you nuts can be reduced or even eliminated.

Next Session of In-Person Classes!

The next session of classes at Golden Paws starts on Feb. 20th!  We are offering both Basic and Advanced Manners!  Check out our Total Manners Package to get a reduced cost by purchasing both manners classes at the same time!

We look forward to seeing you in class and helping you on your journey to a better-trained dog!