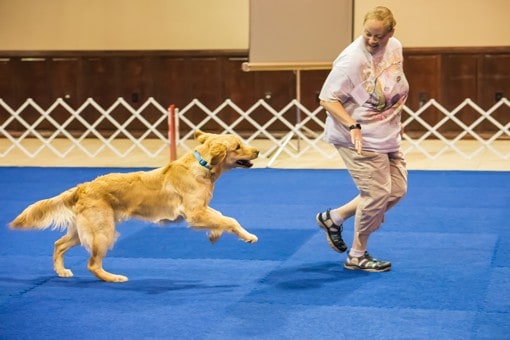 My Dog Just Messed Up – What Do I Do? How to Handle a Mistake in Training

Your dog just made a mistake in training.  What do you do?  How do you handle it?

Knowing what to do in the moment is not always easy!  It generally requires some thinking about what happened and where the dog’s understanding of what you were asking fell short.  It’s hard to think in the middle of a session!  So what should you do?

Most important, don’t blame the dog!  It’s rare that the dog chooses to blatantly disobey – and even if your dog did make that choice, some piece of learning history taught the dog that choosing not to do the behavior is more rewarding than doing it.

Generally dogs make mistakes either because of a lack of understanding or distractions/inability to perform in that environment.  The solution to both of these is more training!

The first is easy to discuss.  You ask the dog to lay down but you haven’t taught it thoroughly.  The dog doesn’t do the behavior because he simply doesn’t understand what you’re asking for.

More typically though, dogs don’t perform the behavior because the context is different.  That could be a distraction that the dog is struggling with, a change in the environment, or a change in the handler cues.

Let’s talk about an example.  You’ve taught your dog to lay down by luring him down with a treat.  He’s doing pretty well, so you decide to just say down and see what happens.  Your dog looks at you like he’s never heard the word in his life.

Or this scenario: your dog is so good at sitting for a treat in your kitchen, but when friends come over you can’t get him to stop jumping, let alone sit.

In both situations, the dog needs more training.  For the down, you have to show the dog a down without the lure, then fade the hand signal, before you can simply cue a verbal down.  Sit needs to be taught in a variety of environments with different levels of distraction before you can expect your dog to sit during an exciting time.

I’m going to share a very important secret of good dog trainers – we don’t cue the dog if we aren’t reasonably sure the dog is going to perform the cue.  I mean, why would you want to cue come as your dog is chasing a deer out of the field?  Your dog will hear the cue, but probably won’t come, unless you’ve done quite a bit of recall training.  And the only thing that teaches the dog is ignore your cue.

There are a couple reasons that dogs make mistakes that I didn’t cover.  Sometimes, just like us, dogs have off-days.  Maybe your dog doesn’t feel well, or is tired.  He might know the behavior that you’re asking for, but because he’s not feeling 100%, doing that behavior might be difficult.  If you suspect your dog isn’t feeling well, take the day off.

Finally, if your dog is scared or fearful, it’s unlikely that she will respond to cues as if she would normally.  For a scared or anxious dog, getting them into a situation in which they feel more comfortable takes priority over any training.

The majority of the time, we know that dogs who make mistakes need more training – either training the actual behavior itself or adding generalization and distractions to the behavior.  Just as we wouldn’t ask a complicated math question to a second grader, we can’t ask complicated behaviors of our dogs until we are certain the foundation for that behavior is understood.

So, let’s think about this.  Dogs that make mistakes need more training, don’t feel well, or are scared.  In all three of these situations, repeating the failed behavior over and over doesn’t help anyone!  And yet, what is our natural response to mistakes?  Try again until the dog gets it right!

If we continue to repeat the behavior without changing something, both you and your dog will become frustrated.  In order to have a productive training session, frustration is something you want to try and avoid.

So what should we do instead?  Of course, that depends on the situation and the dog!

If I’m working with a dog that I feel really should be able to perform that task that I’m asking, I will try to ask the dog to do the behavior ONE more time.  If he struggles again, I change something.  Even if I’m confident he knows it, I will change something to increase the chance of success on the next rep.  Continued failures aren’t good for you or your dog!

If I’m not 100% confident that my dog knows the behavior and is capable of performing in that environment, I will immediately change something to make success more likely.

In any situation, I want to break the dog out of the behavior and get her moving, so my go-to is to throw a reset treat.  If I have a sensitive dog that flattens a little when he makes a mistake, I will ask for a super easy behavior to reward before I try again.  If you’re not sure how to handle any mistake, throwing a reset treat or asking for an easy behavior to reward is never a bad way to react!

Let me share one more secret.  Dogs don’t go into a training session thinking “I’m not happy with my mom so I’m going to blatantly ignore everything she says today just to make her mad.”  Sounds ridiculous when we put it that way, doesn’t it?  And yet, what are we thinking when we say things like “he KNOWS this!”?  We are assuming that the dog knows the behavior, is completely capable of performing the behavior, and is choosing not to in order to spite us or make us mad.  Dogs just don’t think that way!

Next week we’ll talk through some common examples of mistakes dogs make and what we can change to make success more likely.  See you then!

The Golden Star Puppy Socialization program is the gold standard of puppy classes!

Our program is designed to expose your dog to many different things, including other puppies, adult dogs, kids, adults, sounds, surfaces, common household equipment, and so much more.

We start teaching the pup some manners, explore enrichment opportunities, and engage the pup in very short controlled playing sessions with other puppies.

Focus is on teaching puppies to confidently ignore other dogs and be calm, rather than thinking every dog is their playmate.

We offer ongoing weekly puppy classes on Saturday mornings.  It’s a rolling enrollment, so you can start anytime that’s convienent for you.  We welcome puppies from 8 – 16 weeks old.