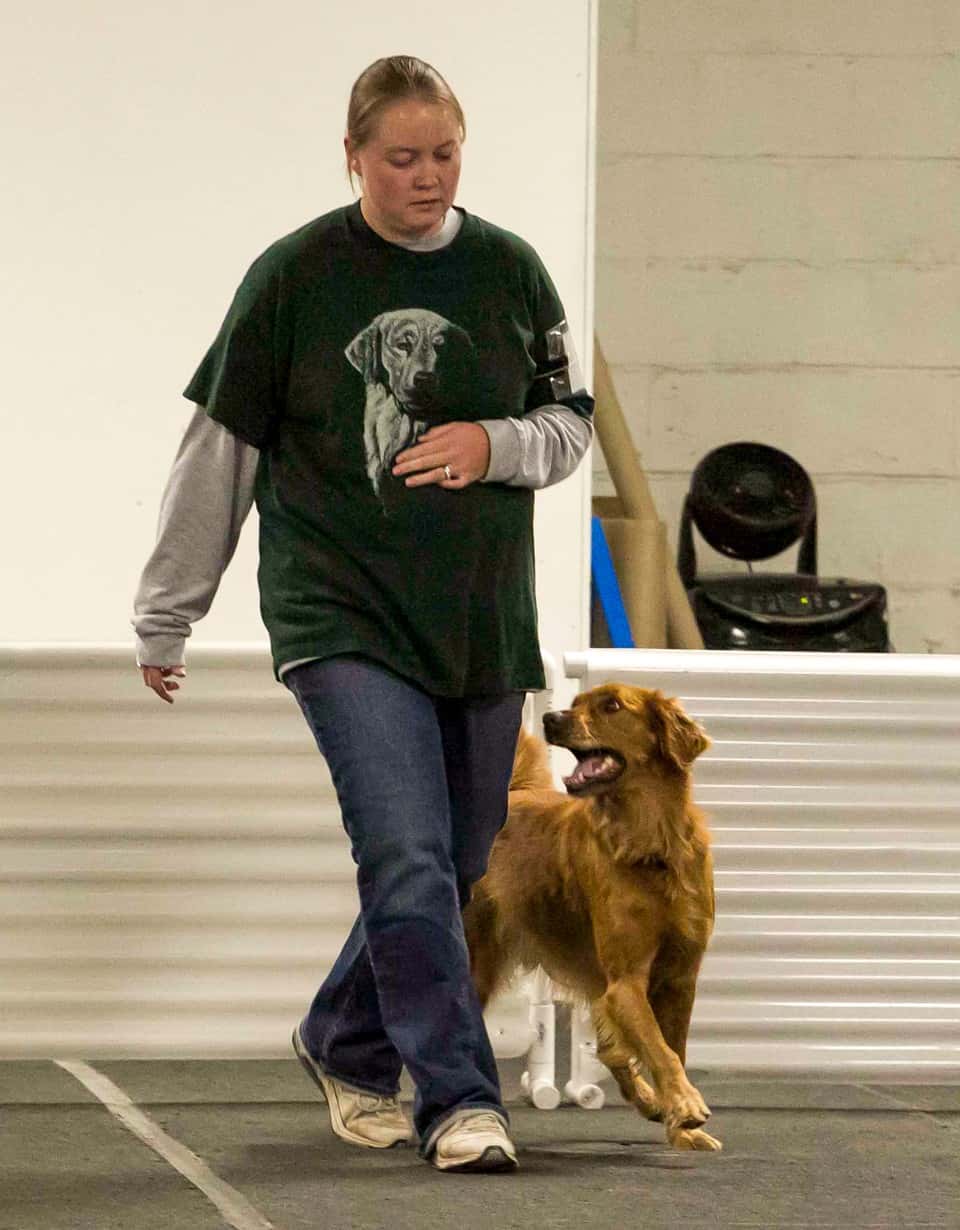 Clarity is Everything: Using Reward Markers to Your Advantage

Does your dog move toward you when you reward?  Maybe he gets up from a down, or comes into you on the go-outs.  If you’re heeling, does she move in front of you to collect her treat, or excitedly jump on you as you grab the toy?  Is your dog frantic and hard to take treats and toys, or easily prone to frustration when you finish a behavior and try to reward?

The solution is simple – reward markers!  If your dog knows where and how he will get the reward, he will know what to expect and therefore less prone to frustration.  Using location specific markers will affect what the dog does between the marker and getting the reward, which is valuable to us during training!

Reward markers can be a complicated subject, but they don’t have to be!  Let’s discuss how learning about and utilizing reward markers can help with clearer communication between you and your dog.

First, let’s define reward markers.  A reward marker is a sound or word that predicts to the dog that reinforcement is coming.  Timed correctly, a reward marker can communicate to the dog exactly which behavior is being reinforced.  Dogs are more likely to repeat behaviors that are reinforced, so if we can tell them what they did right, it is very helpful in our training.

Let’s walk through an example.  You tell your dog to sit.  When the dog’s rear end hits the ground, you say “yes” and give the dog a treat.  The dog understands that he was rewarded for putting his butt on the ground.

But what if you’re a little bit late with your timing?  Your excited puppy sits for 1.2 seconds and bounces back up, and your marker was a bit late, so what did you actually reward?  Ooops – you rewarded the dog getting up!!  Timing is everything!

Say you’re working on eye contact.  You say “yes” when your dog makes eye contact, but you are reaching for your treat at the same time.  Your ever-observant dog is noticing your hand moving before you say yes, so he starts focusing on that hand.  Your “yes” comes just as he’s looking at the hand.  So what did you mark??  You actually marked the dog looking *away* from you, which is the exact opposite of what we want!!

Timing and clarity are everything with reward markers!!  Be sure you are very still when you mark, and don’t move to the reward until after you’ve marked.

So the dog understands that when he hears “yes”, he is getting a reward for the behavior he just did, but unless you’ve trained it specifically, he will not know what he’s getting or how it’s being delivered.  Most of the time the dog will either come toward you to get his treat or you will put the treat in your dog’s mouth.  What if you could tell your dog where the treat will be delivered?  That could affect the way in which the dog does the behavior!  How exciting is that?!?

Here’s an example.  Your pup is learning down.  When her elbows hit the ground, you say yes and reach to give your dog the treat.  As you reach down, she reaches up and her elbows come off the ground.  Dogs want to go where the reward is coming from, so the more you reward for down the less solid her down becomes as she’s reaching up to get the treat.

Now let’s think of this scenario.  Your pup is learning down.  When his elbows hit the ground, you say “ground” which means to the dog that he will get one treat on the floor in between his front legs.  When you say ground, the dog looks down and waits for the treat to show up.  He is not thinking about getting up at all, but rather the reward marker is enforcing the behavior that he’s doing, which is down. 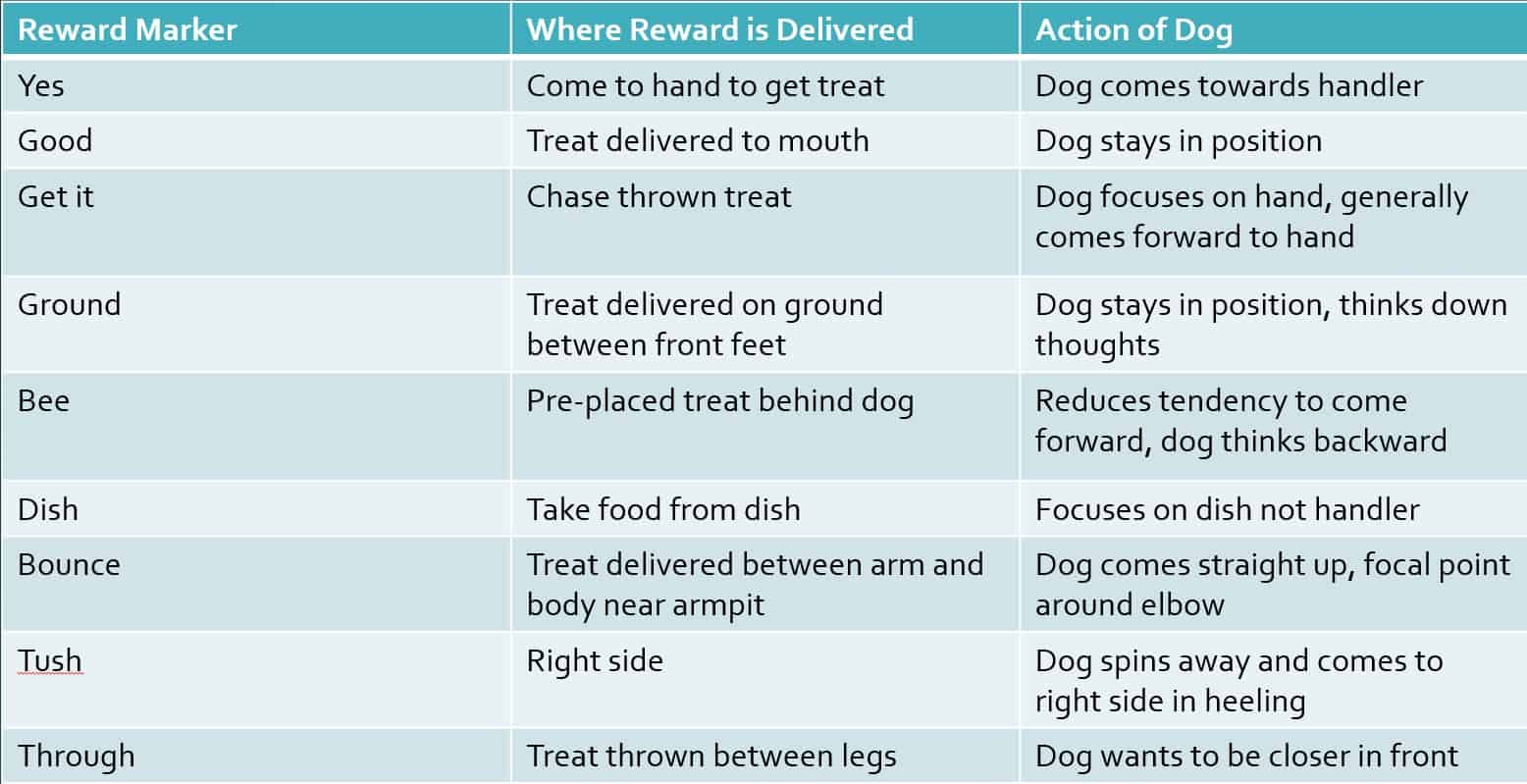 Here is a video highlighting some of the reward markers that I use regularly.

Let’s talk through another common example.  Your dog tends to forge and wrap a bit in heeling, which causes her rear end to be out in both heeling and halts.  You keep your treats in your right hand and reward by feeding across your body.  This reinforces the forging wrapping behavior.

How can we use location specific reward markers to counter this behavior?  Oh, the possibilities are endless!  You want to counter what the dog is naturally doing, which is forging and wrapping, making the dog crooked.  So we need to reward in a way that will give us the opposite effect.  We want to reward the dog in a way to encourage her butt to get in and get her focus up toward our shoulders versus across our bodies.

This is a common problem, and I use a variety for location specific reward markers from the examples above.  Bounce tells my dog to jump straight up and get a reward in my armpit area.  This encourages straightness and focus up.  Tush spins the dog away from me and to my right side to get the reward.  This counters butt out because you’re spinning the dog the other way, counters forging because the dog is going behind you, and counters wide heeling because the treat is delivered on the right.  Bee tells the dog the reinforcement is behind him, which counters forging by sending the dog backward and counters butt out if you spin the dog away from you to go back.

The reward marker possibilities are endless!  Teach the ones that work for your dog.  Think about what issues your dog has and how you can counter that with placement of reward, then find a location specific reward marker that will give you that placement.

If you want to learn more about placement of reward and all about reward markers, join me for my workshop coming up at Fenzi Dog Sports Academy!

Fronts and Finishes and FUN, Oh My!!

Are fronts and finishes essential to your sport?  Do you have a young pup who needs to learn these important skills, or an already-trained dog who could use a refresher?  Maybe your dog is getting a little burned out because you’re working too much on precision and not as much as fun.

If so, this class is perfect for you!

Finding the FUN in Fronts and Finishes starts on April 1, 2022 at Fenzi Dog Sports Academy.  Registration will open on March 22.  Click on the button below to see the description, syllabus, and more!