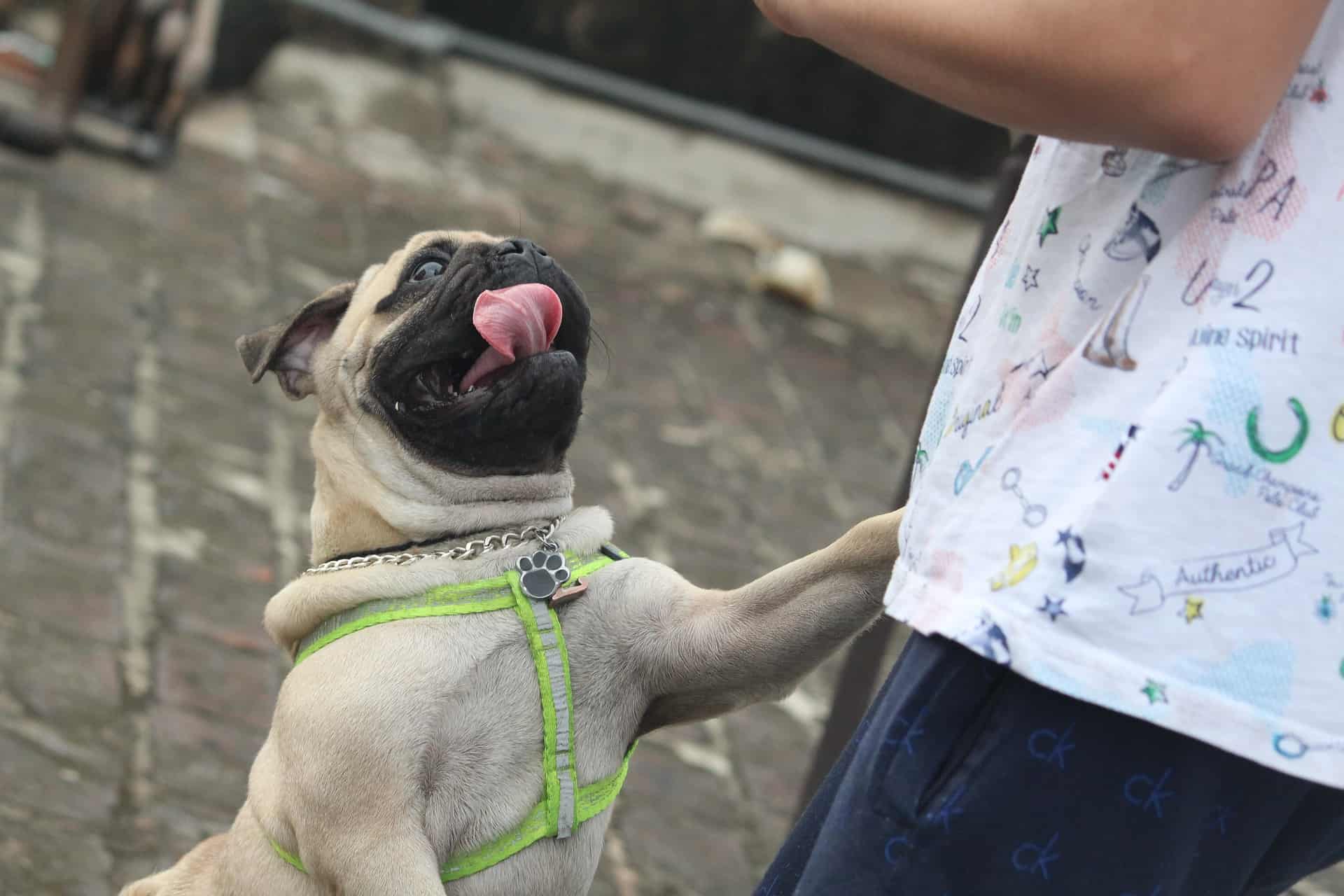 Calm Down! How Food Reduces Arousal for Excited Dogs

Imagine this.  You’re pulling into your driveway after a long stressful work day.  When you walk into the house, your 65 pound lab starts frantically jumping at you while whining.  He’s just so happy and excited to see you, but nothing you do calms him down.  The more you push him off and yell sit, the harder he comes back, jumping at your face.

Does this sound familiar?  Perhaps there are other situations in which your dog is so excited that he can’t control himself.  For my young golden, it’s coming out of the crate.  When he’s been alone in the crate for a few hours, he loses his brains when I let him out.  He spins in circles, jumps at me, and whines or barks before I can get him out the door to go outside.  It’s a very frustrating problem to have!

Because my young golden is very prone to frustration and over-arousal, I’ve really had to increase my understanding of how to lower arousal and get back my thinking dog.  One change has made more difference than anything else, and that’s food.

When dogs sniff, lick, and chew, chemicals are released in their brains and these chemicals make them feel calmer and happier.  It works similar to humans; when you’re stressed, what do you crave?  Probably comfort food – there’s a reason it’s called “comfort” food!!  For me it’s carbs and chocolate!

Teach a Cue that Means Food is Coming

You can call it whatever you want, but it’s a good idea to have a verbal cue meaning “here’s some food!”  I say “scatter.”  Scatter means that I will place several pieces of food on the ground for my dog to find.  I don’t put all the pieces in one pile, but rather spread the pieces out.  My dog is so familiar with this word that when I say it, he immediately stares at the ground!

If you try to all of a sudden introduce food when your dog is super excited and jumping all over you, it’s probably not going to go very well!  Take your time to teach this when the dog is calm.  The more repetitions you do, the more your dog will associate good emotions with the word that you use.

This concept is pretty easy to teach!  Grab a handful of food (kibble or treats).  Say your word, like “scatter,” then place the treats on the floor in a familiar area to your dog.  It’s important that you place the treats, rather than throwing them down.  If you toss them, they will bounce all over the place and that motion will have the exact opposite effect that we want!

The first couple of times you might have to point out all the food to your dog, but pretty quickly your dog will become very efficient at finding and eating all the food!  Once your dog has mastered this in your living room, try it in other areas of the house.  Then try it outside in the yard.

Use Food to Reduce Arousal in More Exciting Situations

You can start layering difficulty by knocking on the door, then doing a scatter.  Invite friends over.  You can walk out your door and back in.  Say scatter when your dog notices another dog and starts to get excited.  The possibilities are endless! 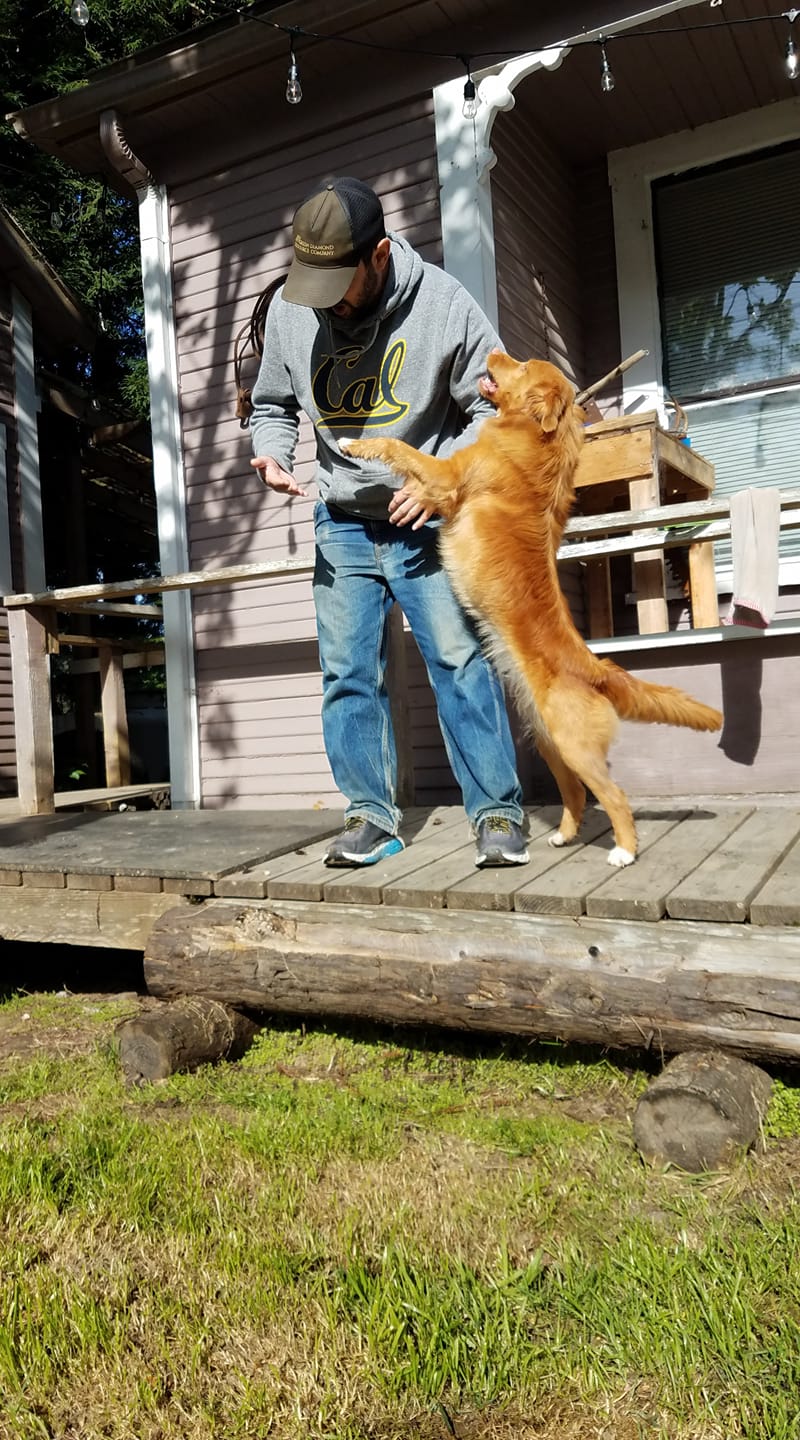 Example of Using Food to Reduce Arousal with Excel

Here is one real-life example of how I use scatter.  Remember how I said that my golden goes nuts when he gets let out of the crate?  It was SO frustrating, plus I knew that wasn’t good for him.  So I sat down and came up with a training plan.  My training plan consisted of two parts.  The first was using a scatter as soon as he comes out of this crate.  Before I even open the door, I grab a handful of kibble.  I open the door, release him, and immediately say “scatter” as I spread the food around.  By the time he’s done scarfing down all the food, he is slightly calmer.

This allowed me to implement the second part of my training plan, which was taught separately during a time in which he was calm.  I taught him to target the door.  Once he’s done with scatter, he’s slightly calmer, at least enough for him to perform a behavior for additional reinforcement.  He knows now to run to the door and wait for me to come reward him and open the door.

Taking a fairly short amount of time to teach Excel scatter and targeting the door has reduced my stress level SO much!  I used to get so frustrated, trying to get him out the door while protecting my nose as he was jumping at me.  Now we have a little system which totally replaced all those bad behaviors.  In fact, I don’t even have to do a scatter every time anymore, because of the training history and associations that he now has with coming out of his kennel.  If using scatter to lower arousal is paired enough times with a behavior, you will begin to change the dog’s emotions about the situation.

Typically what I do with client dogs is start with one scatter during a high-arousal time (after the dog has been taught what scatter is).  If the dog is still insane and crazy, I’ll do another scatter.  As soon as I can see the dog come down a notch, I ask for a really simple easy behavior with a lot of reward history, like sit or touch.  I mark and reward for that behavior.  The goal is to get the dog calm enough to perform a behavior on cue.

If you have multiple dogs, your job is a bit harder.  You need to teach these concepts to each dog separately, then bring them together during a lower-arousal situation.  If your dogs have any resource guarding issues with the other dog(s), please do not attempt scattering food without the help of  a professional.  For some dogs, it’s a small step to go from extreme arousal to redirected aggression, and the addition of food can make things worse.

Sometimes the dog is so overwhelmed that he/she can’t even eat the food.  If you find yourself in this situation, remember a couple things.  First, the majority of the time the dog that can’t eat can’t learn in that moment.  Second, make sure you’ve taught the concept to the dog in lower-arousal situations, where he/she CAN eat.  You may need to more slowly increase the excitement of the environment to build up to the situation in which your dog can’t eat.  You can also use higher-value treats.  I usually use kibble but I wouldn’t hesitate to break out the string cheese or tiny bits of liver if kibble wasn’t doing the trick.  For my dogs (golden retrievers), they would eat pocket lint and think it was the best thing in the word!!

Have fun playing around with this concept and see how it affects your dog’s arousal levels!  Please reach out to me if you have any comments or questions!

Next Session of In-Person Classes!

The next session of classes at Golden Paws starts on Feb. 20th!  We are offering both Basic and Advanced Manners!  Check out our Total Manners Package to get a reduced cost by purchasing both manners classes at the same time!

We look forward to seeing you in class and helping you on your journey to a better-trained dog!