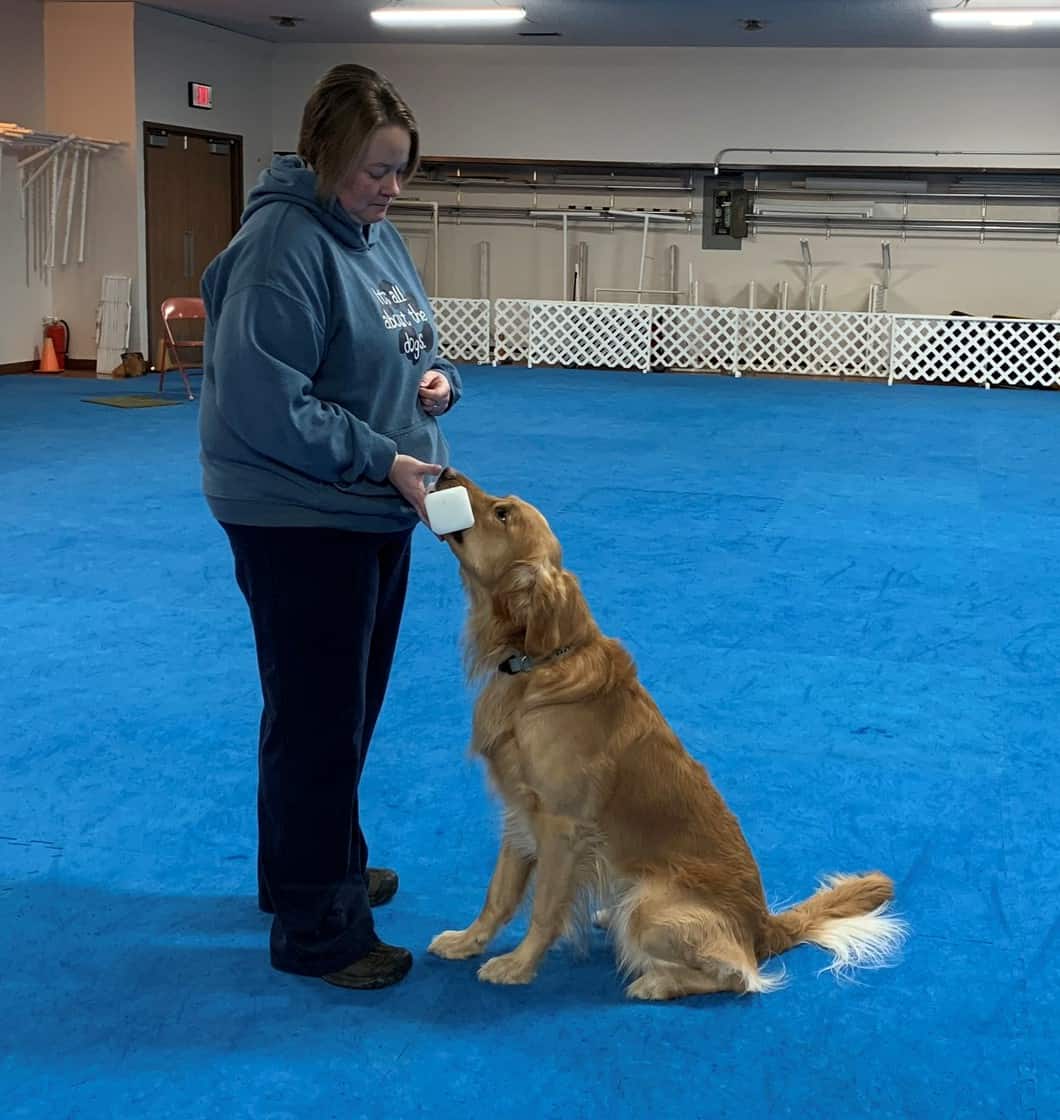 Break It Down and Build It Up: Splitting Behaviors

One thing most, if not all, trainers are guilty of is lumping behaviors or adding too much criteria at one time.  To us, it doesn’t seem that complicated, but to a dog, each piece of every behavior needs to be taught before putting it all together.

It’s a great skill to be able to think of each piece that makes up a particular behavior or exercise.  Teaching the dog all the skills separately will help your training go a lot faster, and you will also have a foundation to go back to if the behavior falls apart later.

Let’s look at a few examples.  We’ll start with the novice-level obedience recall.  All the dog has to do is stay until you call him or her.  Easy, right?

Let’s list out the skills needed for the recall.

Wow, that’s a lot of steps for such a simple behavior!  You can see that the one behavior, a recall, is a whole chain of smaller behaviors.  Some of these are repeated a few different times in the chain but everything still needs to be taught and generalized.

Each piece of this chain can further be broken down.  You aren’t going to go train a 30 foot stay in one session, right?  It will take you many sessions to build up this skill.

You can see how complicated this becomes!  Not only does each piece of this chain need to be taught, it has to be taught well.  The dog must understand how to fluently perform each piece of the behavior before it can be chained with other behaviors.

It’s pretty tough to do a novice recall without a solid stay.  There are other ways you can work on the recall bits without the stay, so although you can be training these pieces simultaneously, you still need to teach each to criteria before chaining it together.

Let’s look at another example and just talk about a sit.

There’s only one behavior in a sit, right?  The dog puts his butt on the ground.  Simple enough.

But for an obedience sit, we generally want a tuck sit.  Now the dog needs to do several things.  She needs to keep her weight on her front end as she tucks her butt underneath.  Her front feet need to stay stationary.  In both front and heel positions, her head needs to look up.  Not so simple anymore, is it?

For each of those skills in the sit, there are different things to teach.  Maybe you use a front foot target to teach the legs to be stationary.  Perhaps a chin rest to keep the dog’s weight on her front end?  Each of those skills also need to be broken down and trained.

OK, so how about an even more complicated behavior – the Utility Directed Jumping exercise?  In this exercise, the dog is sent straight out until told to sit, then directed over a jump and into front, then proceeds to heel position.  Let’s list out all the skills the dog needs to know.

That’s a lot of stuff, isn’t it?  This exercise consists of two big behaviors – the go out and the directed jumping.  Each of those has many parts.

If our directed jumping exercise is broken, it means we need to do a better job of teaching one of those parts, and in order to do that, we need to figure out how much that particular behavior can be broken down.

The next time you are trying to teach a behavior or fix a behavior that is broken, think about all the fine pieces that go into that behavior.  Then train those pieces, before you put them all together.  Your dog will learn better, perform better, and be much less likely to make mistakes later on.

Does Your Dog Struggle with Distractions?

If you’re struggling to get strong behaviors in places other than your living room, my brand new online class The PROOF in in the Training: Building Strong Behaviors is for you!  You will learn how to utilize a training plan to get you from where you’re at to where you want to be.  We’ll talk about how to add distractions in a way that helps your dog be successful and strengthen the dog’s behavior and confidence.

Generalization is just another distraction and we’ll cover that concept too!

Registration is open until Feb. 15th!