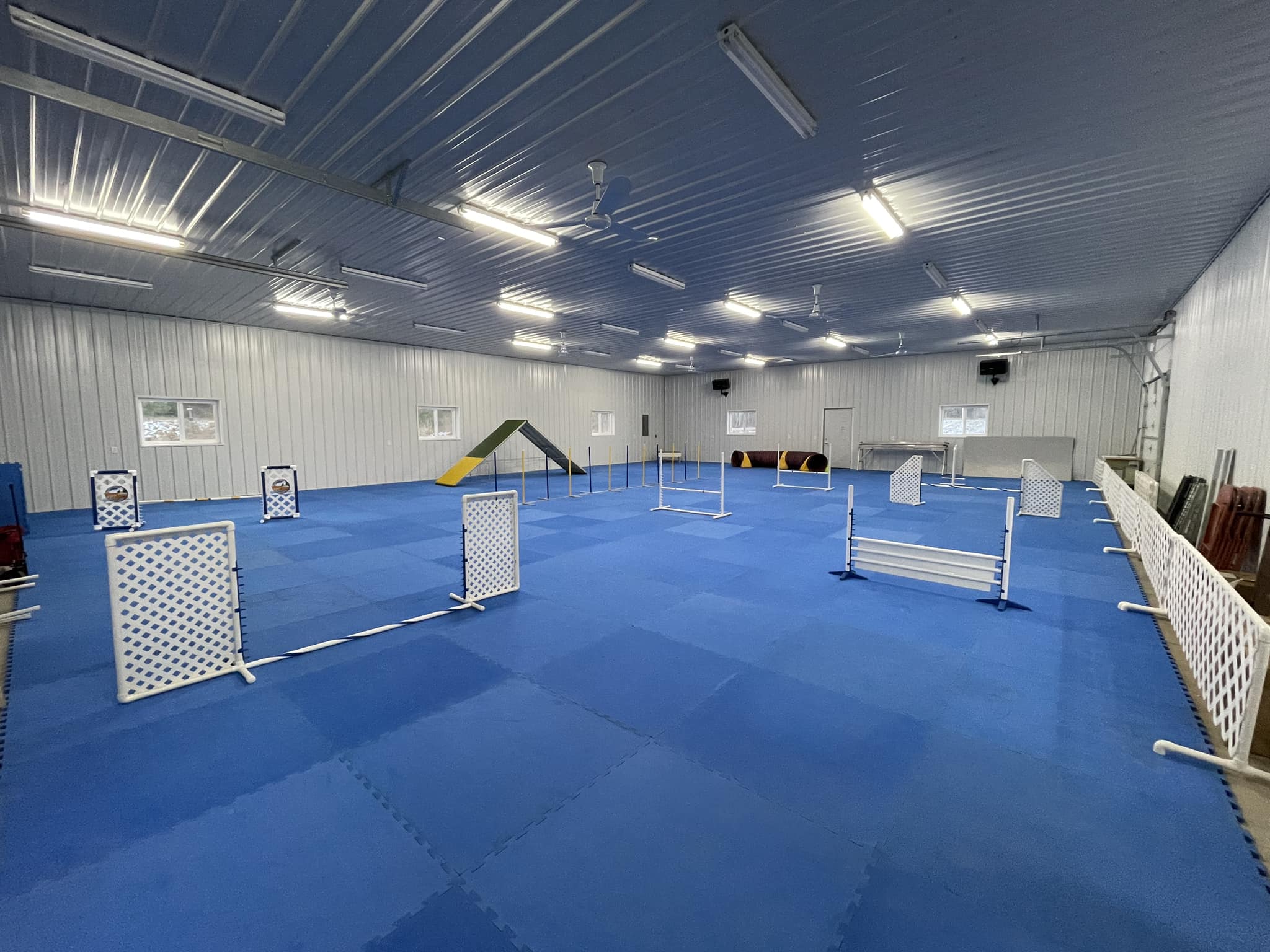 A Journey to a Dream Come True

I fell in love with training dogs back when I was a teenager working with my large German shepherd.  Actually, the passion was ignited well before that, when I was a small kid growing up in Rochester.  Our neighborhood had lots of dogs, and I, having always wanted a dog, would go door-to-door and beg people to let me train their dogs, walk their dogs, anything! 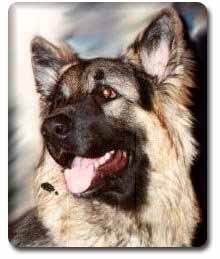 I’m pretty sure my parents finally let me have a dog because they were sick and tired of me asking all the time.  When I was 12, I was finally allowed to get a German shepherd puppy.  I enrolled in 4-H and started with the dog training program.  I also signed up Max for beginner obedience classes, which led to competition classes, which led to where I am today.

In 2007 my husband and I moved to the range.  Just home from Iraq, my husband needed a change and so did I.  I worked for a groomer part-time for a while, but my dream was dog training.  When I put my mind to something, it tends to get done, and in 2008 I started Golden Paws Dog Training.

Starting from nothing, my setup was pretty basic.  I purchased an old set of homemade agility equipment for $300.  I rented a tiny classroom in an old school in the country for just a few dollars per night.  I was also allowed to train in a small fenced area, so that’s where I taught agility during the warmer months.  Throughout this time, I slowly started trading out my homemade equipment for quality PVC jumps, aluminum contacts, and real weaves.  For 4 years, this was Golden Paws.

Through the grapevine, I heard about a building available in Aurora.  I went and checked it out, and we moved Golden Paws there in 2012.  The training area was about 55×55, which was so much better than the tiny classroom I was in.  There was room for crating, and storage for my dog stuff.  It was then that I made my biggest purchase to date: quality flooring that would provide cushion and traction to dogs running agility. 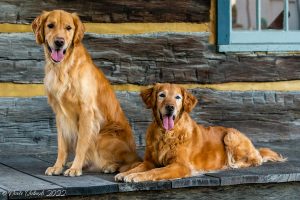 Throughout the time I leased this building, it was for sale.  In 2013 I was told it was being sold so I moved all my stuff out and into storage.  I took a break for maternity leave, and when I was ready to start training again it turned out the sale had fallen through, so I moved back in there, where I ran my business for the next 7 years.

2020 was hard for me, like it was for everyone else.  First COVID, then I was told the building was sold.  For the summer I was able to do one on one training, and then in November I moved out for the final time.  Thankfully, I had started teaching for a prestigious online sports dog training school, which supplemented my income.

Something of My Own

I had always wanted my own facility.  Something that I could build the way I thought it would serve dog training the best.  A building that nobody could kick me out of.  So, I started planning. 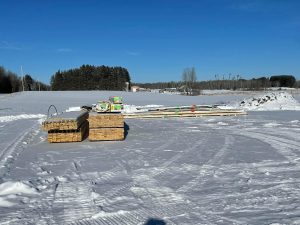 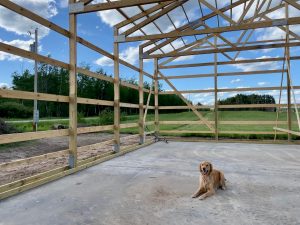 It took me a year to secure the funds and plan the facility.  It was hundreds of hours of filling out applications, pricing out different buildings, reducing the size of the facility to make it affordable, planning every square inch, and talking with construction crews.  In the end, I had a great plan for an awesome dog training facility, albeit smaller than what I originally wanted.

In late October of 2021 the slab was poured.  It was the very last day of above-freezing weather.  In December the materials arrived and were piled on the slab.  March brought the construction crew, who found that over the winter, the slab had significantly risen and cracked.  We had no choice but to wait for the frost to come out and everything to settle. 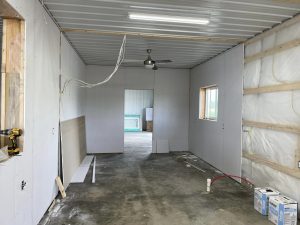 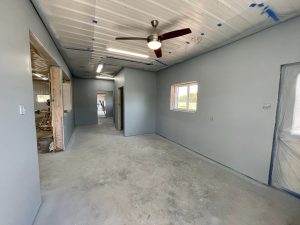 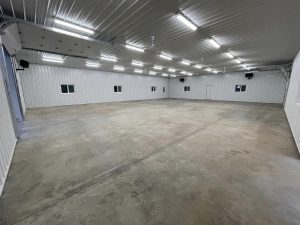 I’ll spare you all the building details, but problem after problem was eventually worked out.  Rising prices, missing parts, delays, and so many factors that were out of our control made for a very stressful summer.  Eventually though, the building was up and we could start the finishing work. 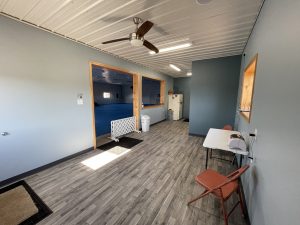 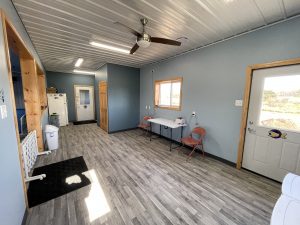 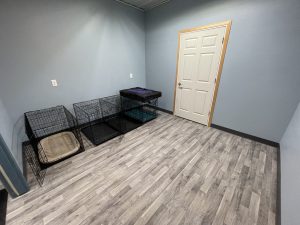 The beginning of November is upon us, and there are still finishing touches that need to be done.  It will be weeks or months before the building is finished, and it may never be completely done.  It took about one year from pouring the concrete to having a functional dog training building.  You will continue to see improvements and additions to Golden Paws Dog Training in the next year or so.  But for now… 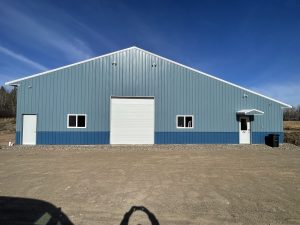 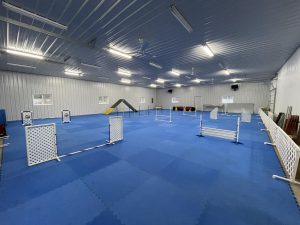 In addition to our state of the art training room and equipment, we have a large entryway and crating room.  Next year we will be adding a 100×100 foot fenced training area outside.

It’s my hope that you and your dog both enjoy this space created exclusively for dog training!

We are SO excited to be opening our brand new training facility and offering classes again!  Registration for both Basic Manners and Golden Star Puppy Puppy Socialization is open NOW!  Come check out the new place with your dog!